Birds eyeview for the boards based on mythical birds

To provide a better understanding of how the features are planned in the sprints and when they will be delivered by a team or multiple teams, Kendis offers board review modes. They are named after Mythical Birds.

Originated from Chilean mythology, Alicanto is a bird known for having its wings shine at night with beautiful metallic colors. Legend has it that the Alicanto fed on silver and gold, making them glow like the sun if they ate gold and shine like the moon when they had silver. It is known to be good luck for the miners. Once seeing the Alicanto, the miners would often follow them to their food source.
The Alicanto view in Kendis stems from the Planning of multiple teams and their Sprints. Whether it is for SAFe PI Planning or planning for 3 or 4 Sprints, this view will allow you to see Sprint by Sprint, which features are being worked on by the teams as well as viewing their dependencies. 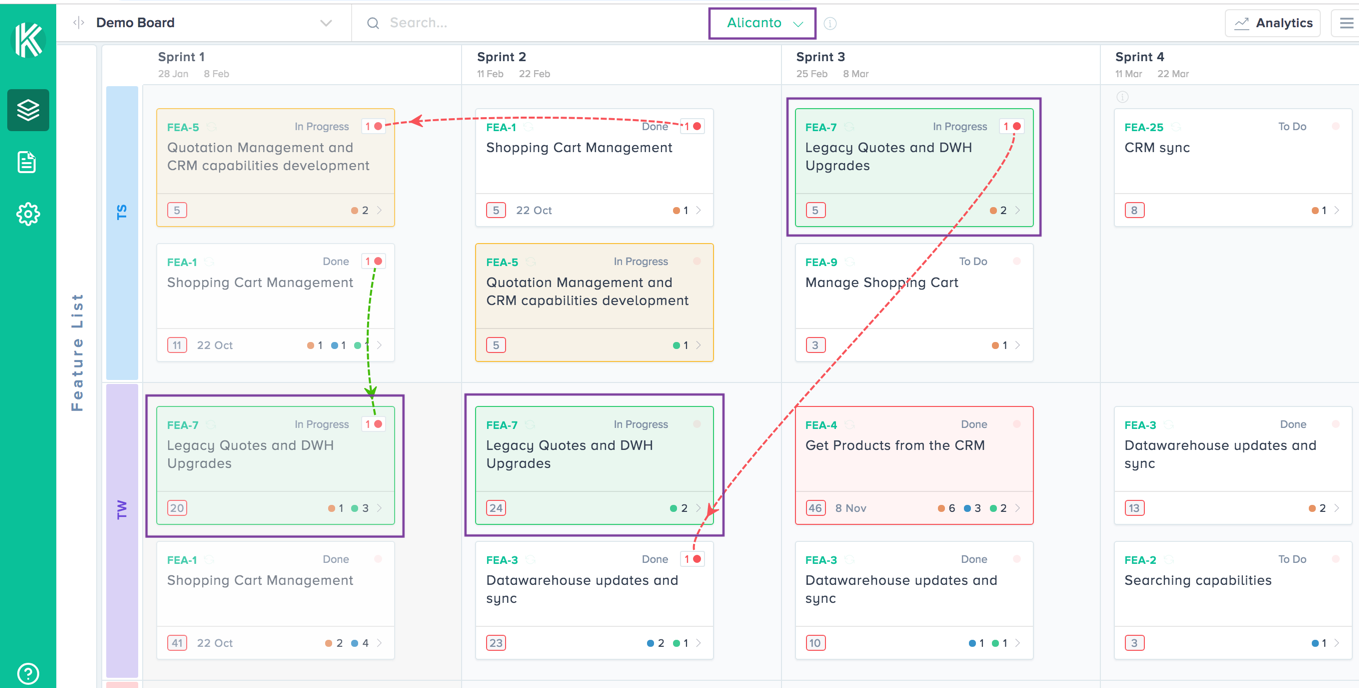 Griffin is a more popularly known creature of Greek Mythology, that has the body and face of a lion and the wings of an eagle. This bird was known for its power and as the guardian of treasure.
The Griffin view in Kendis is a level higher than the Alicanto. It will display the end state of the Features that are being worked on by the teams. So when a particular team will finish their part of the Features or Epics, the Board will display all of the Team stories as well as maintain a view of the dependencies.

This view allows Product Owners, Product Managers, Delivery Managers, Release Management, and Release Train Engineers to have visibility of all the activities on the board. 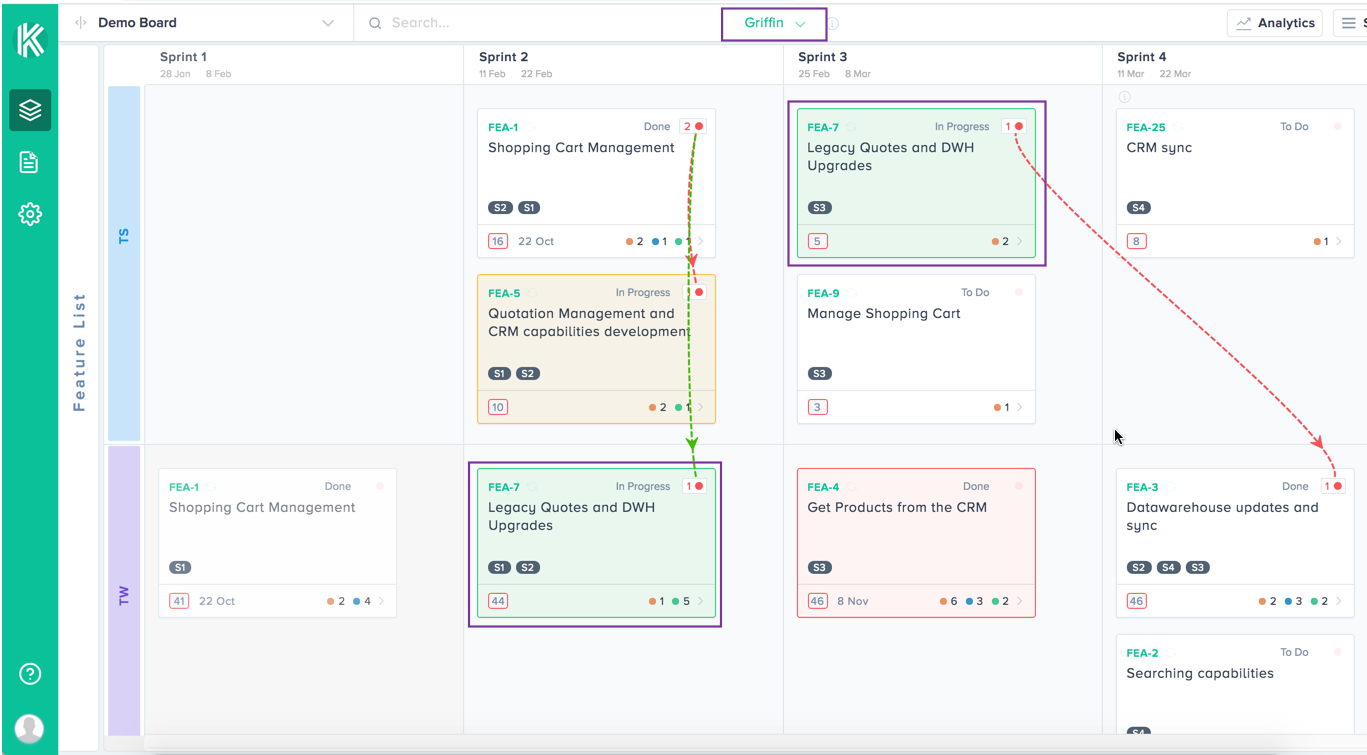 The Phoenix, in Greek mythology, is considered a symbol of resurrection. It is born again from the ashes of the passing away of its predecessor. It represents renewal of time and life in general.
The Phoenix view is the highest board view of the rest. This will display the very end state of the Feature or Epic. If the Feature or Epic is being completed by multiple teams, this will show you the final sprint and team that has been assigned that specific feature. With this view, dependencies remain and it is possible to plan your Releases of the Feature. 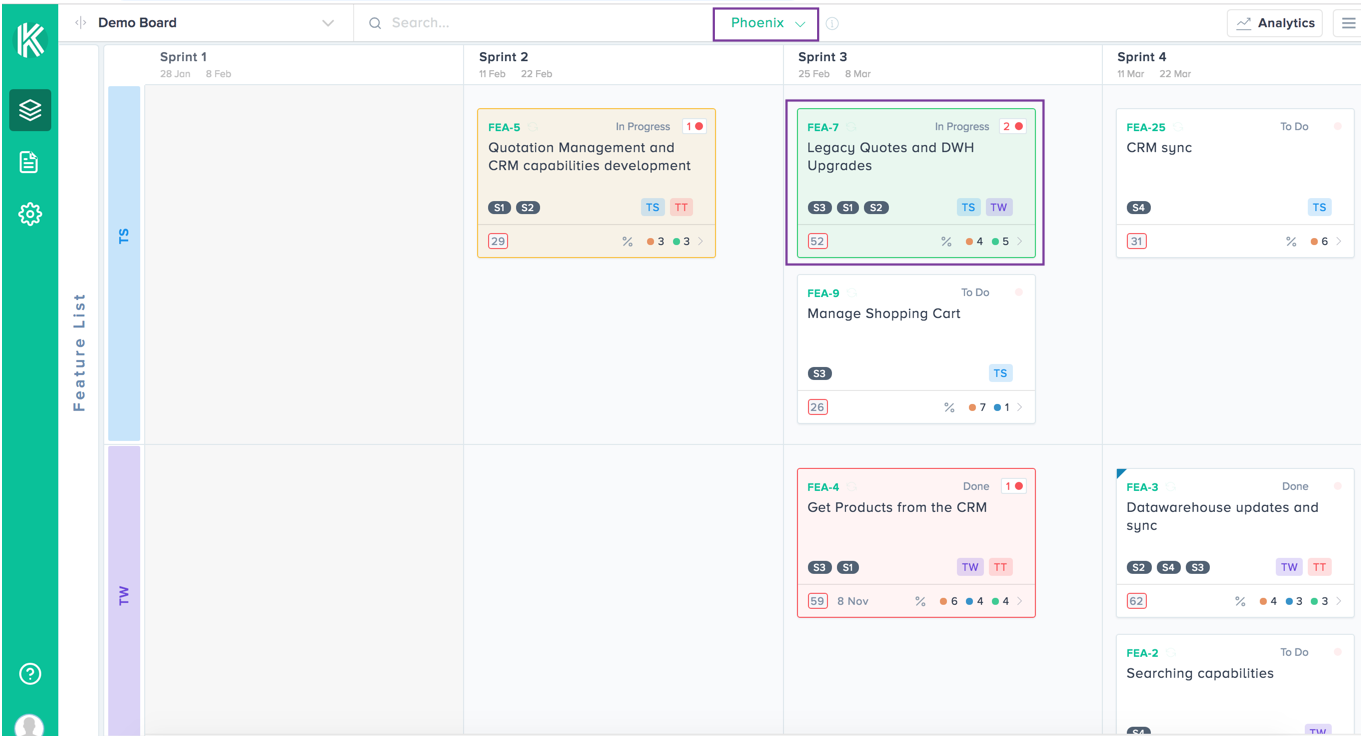 When you click on the option "Phoenix Mode", Kendis will show bring all the planned and unplanned stories of the features and show them under the feature card, this is to give a complete picture of a feature in terms of the story points and stories.

However, during PI Planning, you might be interested in only the "Planned Stories" and planned stories means, the stories that are planned in the sprints mapped on your Kendis board.

If your definition of done for the feature is to complete all the stories during a single PI then this magic option can save you a lot of time in digging out whether teams have planned all of their stories to the sprints or something is still in the backlog. When you click on the Unplanned stories option, Kendis will keep the feature card in Phoenix mode as-is but will only show the unplanned stories. Thus the number of stories and sum of story points on the feature card will be for the unplanned stories. If you see no stories on a card, it means all the stories are planned.

In the case of AzureDevOps boards, there is a special option, when the user clicks on "Matching AreaPath Features", Kendis will show only a single instance of a feature if it has multiple occurrences in Phoenix mode.

A feature can be shown multiple times with the "Blue icon" on the corner in case it has the same delivery sprint for multiple teams.

When the user selects this option, Kendis will check the "AreaPath" of the feature and will match with the team AreaPath