Features planning and tracking is an important part of the PI/Big room planning. Since many teams are often involved in delivering a feature, tracking isn't a simple task. With Kendis analytics, valuable information for Release Train Engineers (RTEs), Business Owners, Program Managers, and other relevant team members is readily available.

Difficult questions like what got added to the PI after planning, or which features have slipped their original plans are often impossible to find in your agile tools like Jira or AzureDevOps.

This section of analytics has

This section is only available once your board is in the Tracking state.

What is a Scope Change?

The percentage will calculate the amount of change to the overall board, depending on existing features, stories, or story points.

Tip: These numbers are clickable and show the exact contents that are added to the board

Feature delivery variation means the features that have changed their "Phoenix" sprint after the planning, e.g. if a feature was supposed to be done by Sprint 3 and when a story moved from Sprint 3 to Sprint 4, it will push the feature delivery to sprint 4. Finding such information is very difficult but with Kendis analytics, it is available right away at your fingertips.

Sprint Planning Variations show the stories that have changed their originally planned sprints. The purpose of this information is to make it easier to understand the changes that happened after the planning, since teams often plan their stories after PI planning during their sprint plannings, however, sometimes a crucial feature could be delayed just because a story that was originally supposed to be done in Sprint-x was moved to some other sprint.

This section provides a comprehensive overview of the features that are planned on your board. It shows the ID, Summary, Status and the percentage completion based on the number of stories and story points (estimate).

The last 2 columns are most important ones, they show the split of a feature to teams and sprints.

The notation X/Y means that X = Done and Y= Total.

FEA-5 has the following break down and it means that there are 5 stories in total, 1 in progress, and 4 done. There are 2 teams, CRM and DWH that are involved. The CRM team has 2 stories and both are done. DWH team has 3 stories and 2 are done, the only open story is in S4 (Sprint 4), which is highlighted by 0/1. 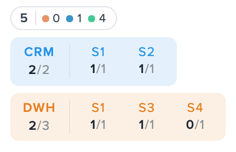 In this section, there are a number of filtration options available